After the abject failure of the homemade ‘plaster of Paris’ I purchased the real thing. I experimented with a number of spaces, choosing everyday vessels for casting from and marking or embedding them with other found objects.

Bakery tray and pasta with Brusho

After arranging dry pasta pieces in a bakery tray I sprinkled the tray with Brusho to add colour then poured plaster of Paris over the top.

Once the plaster was dry, I popped it out of the tray. The plaster had seeped under the pasta more than I had hoped but there were still some shapes visible. There were also pockets of air which added interesting texture.

The colours of the Brusho had stayed as sprinkles and had dispersed but not fully blended which is what I had intended. 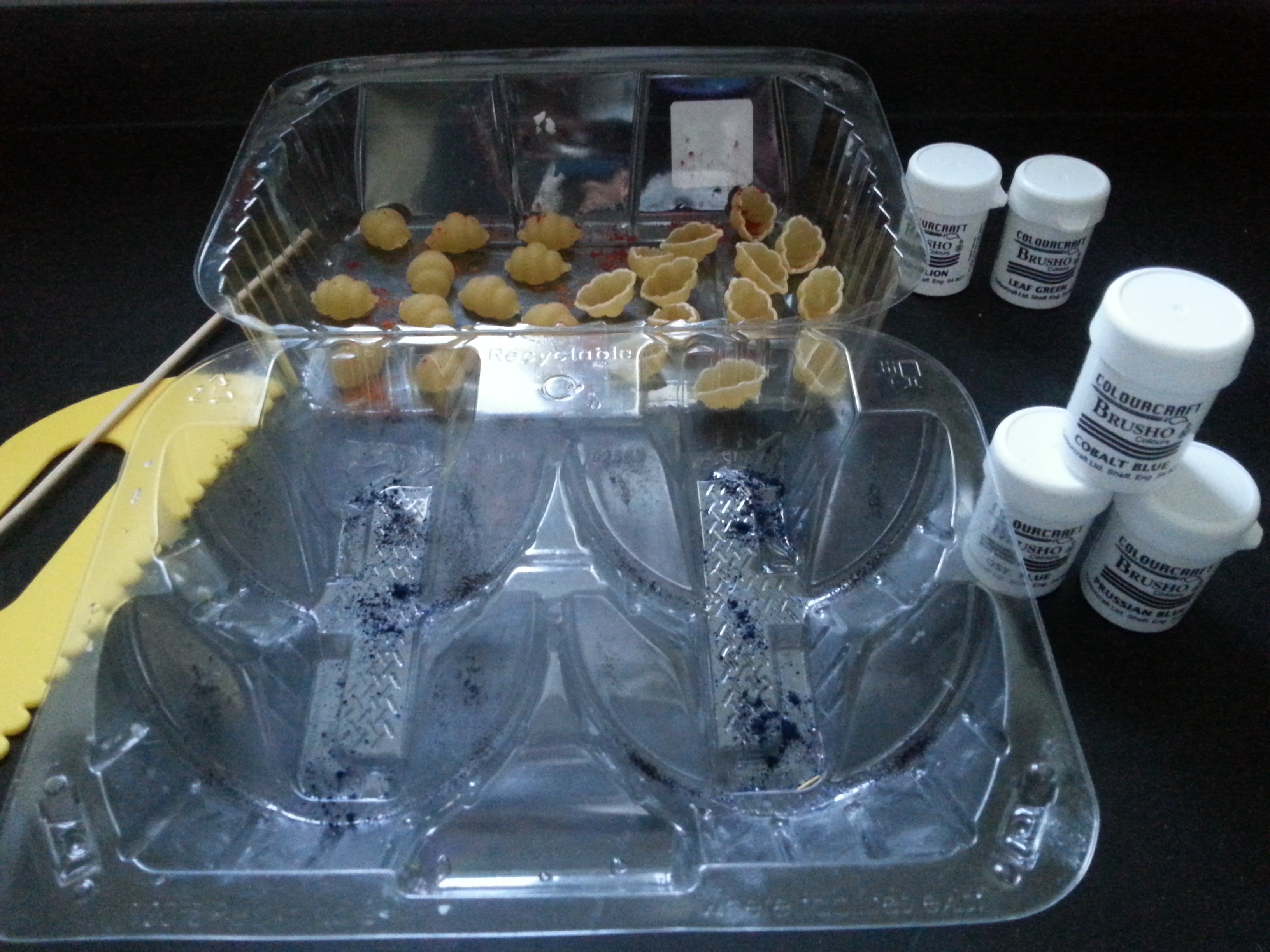 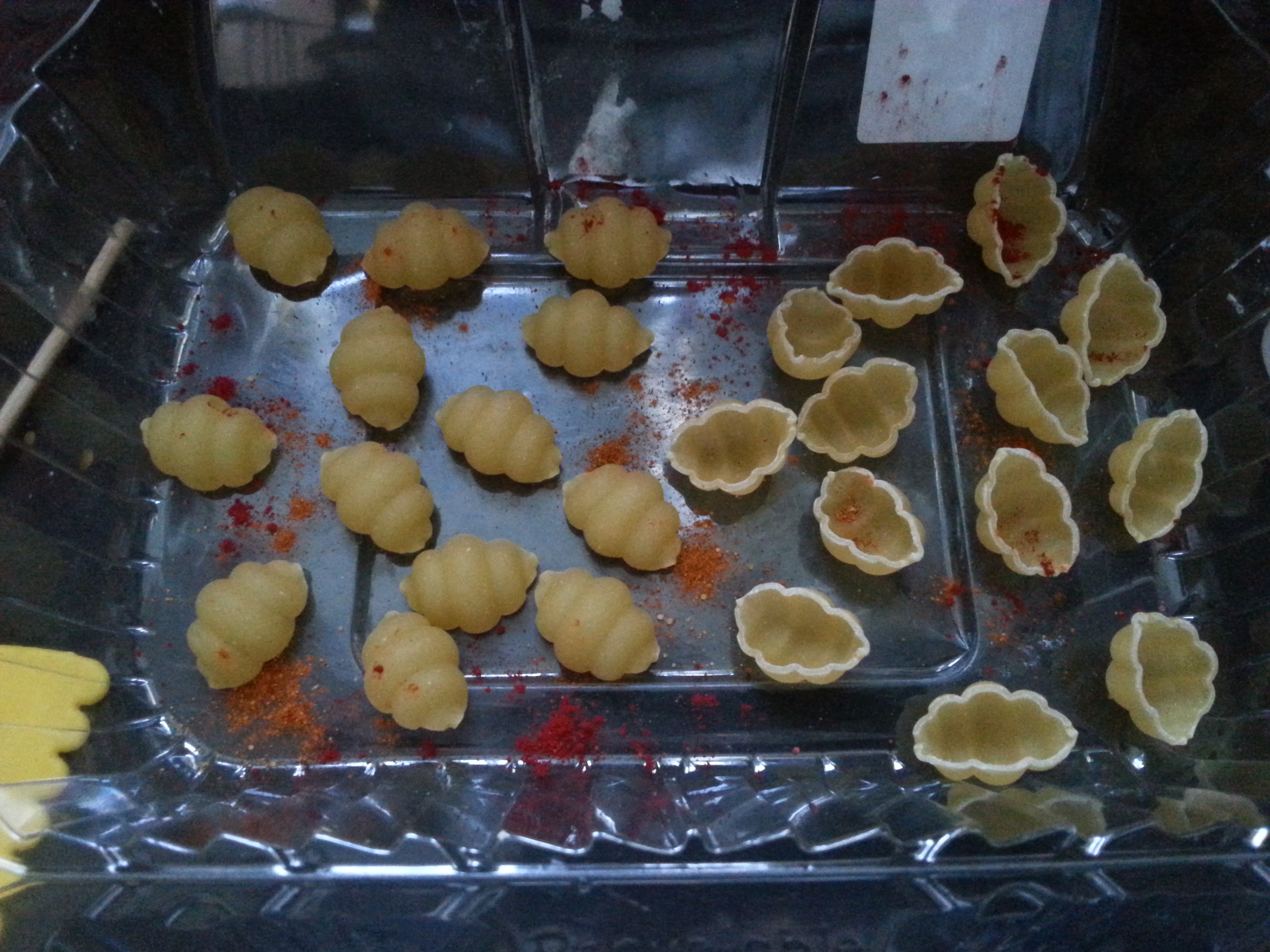 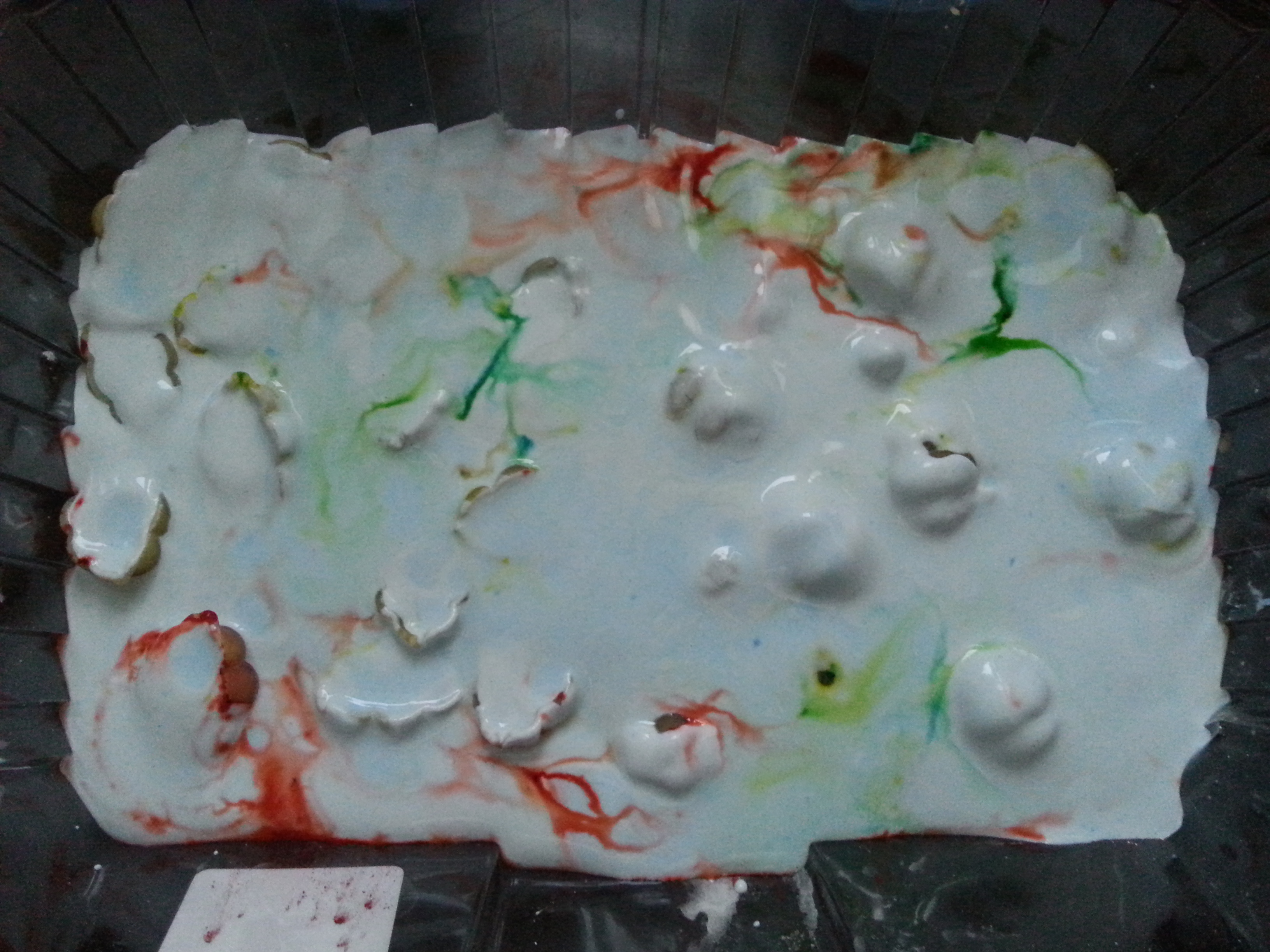 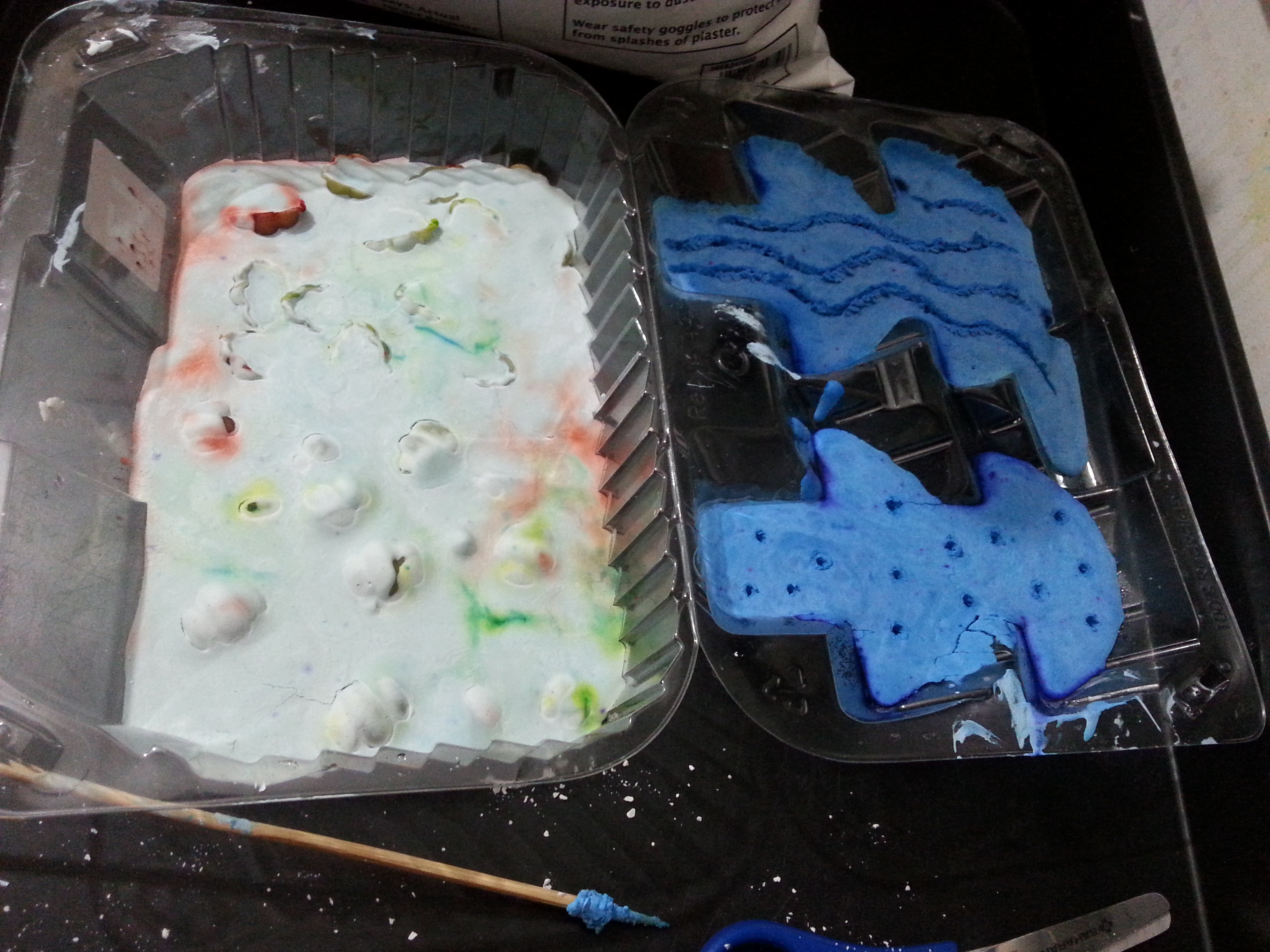 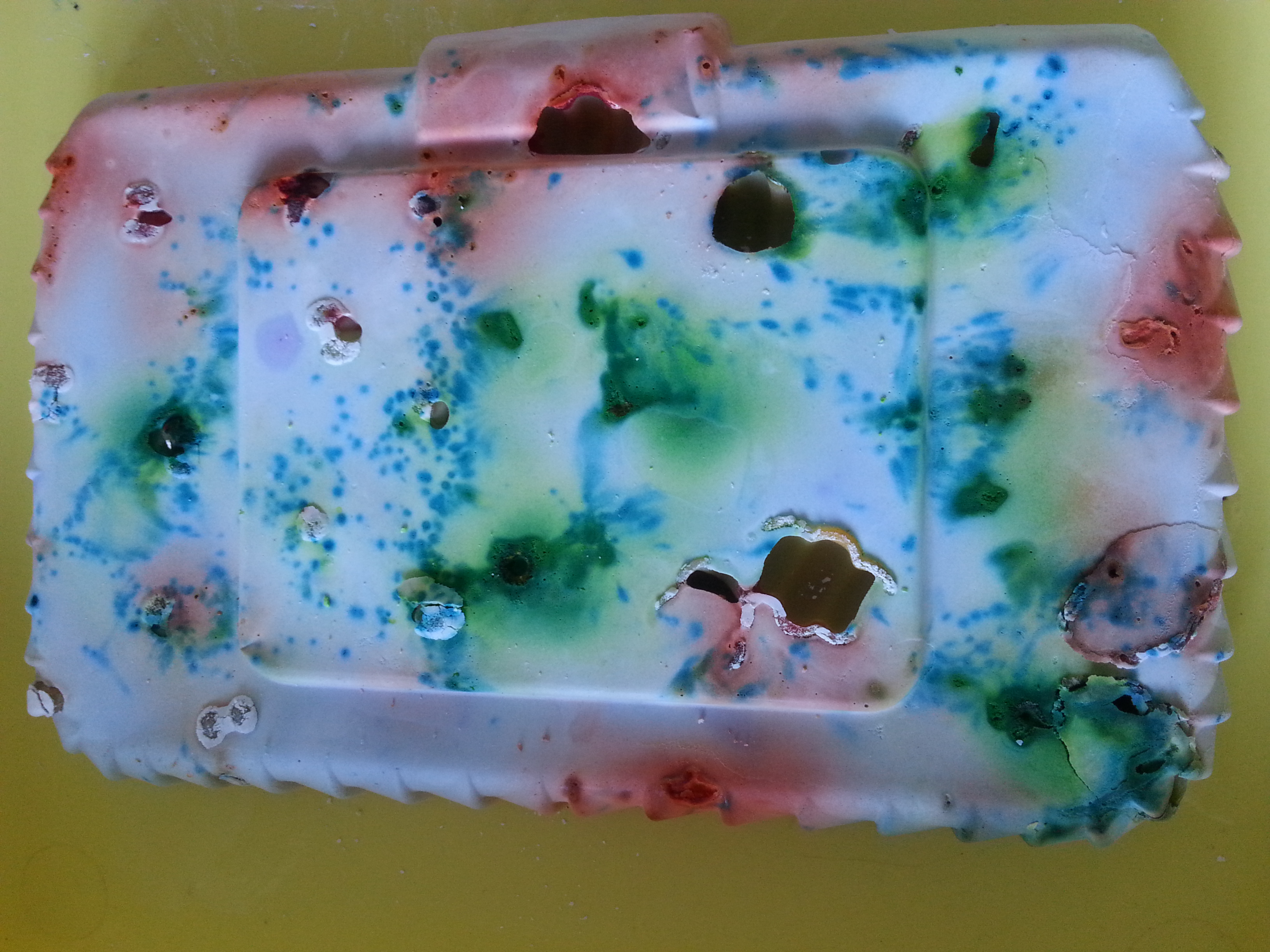 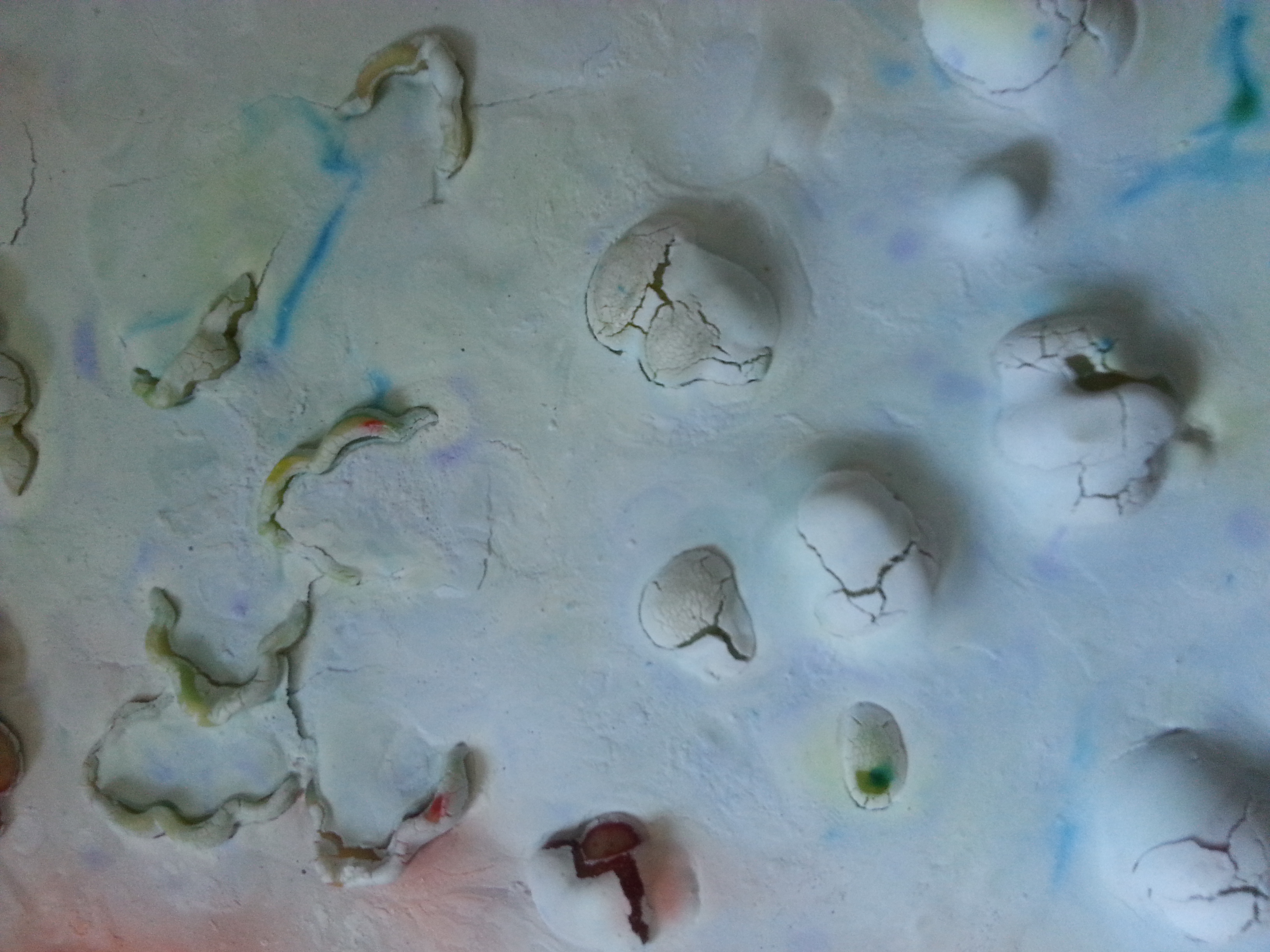 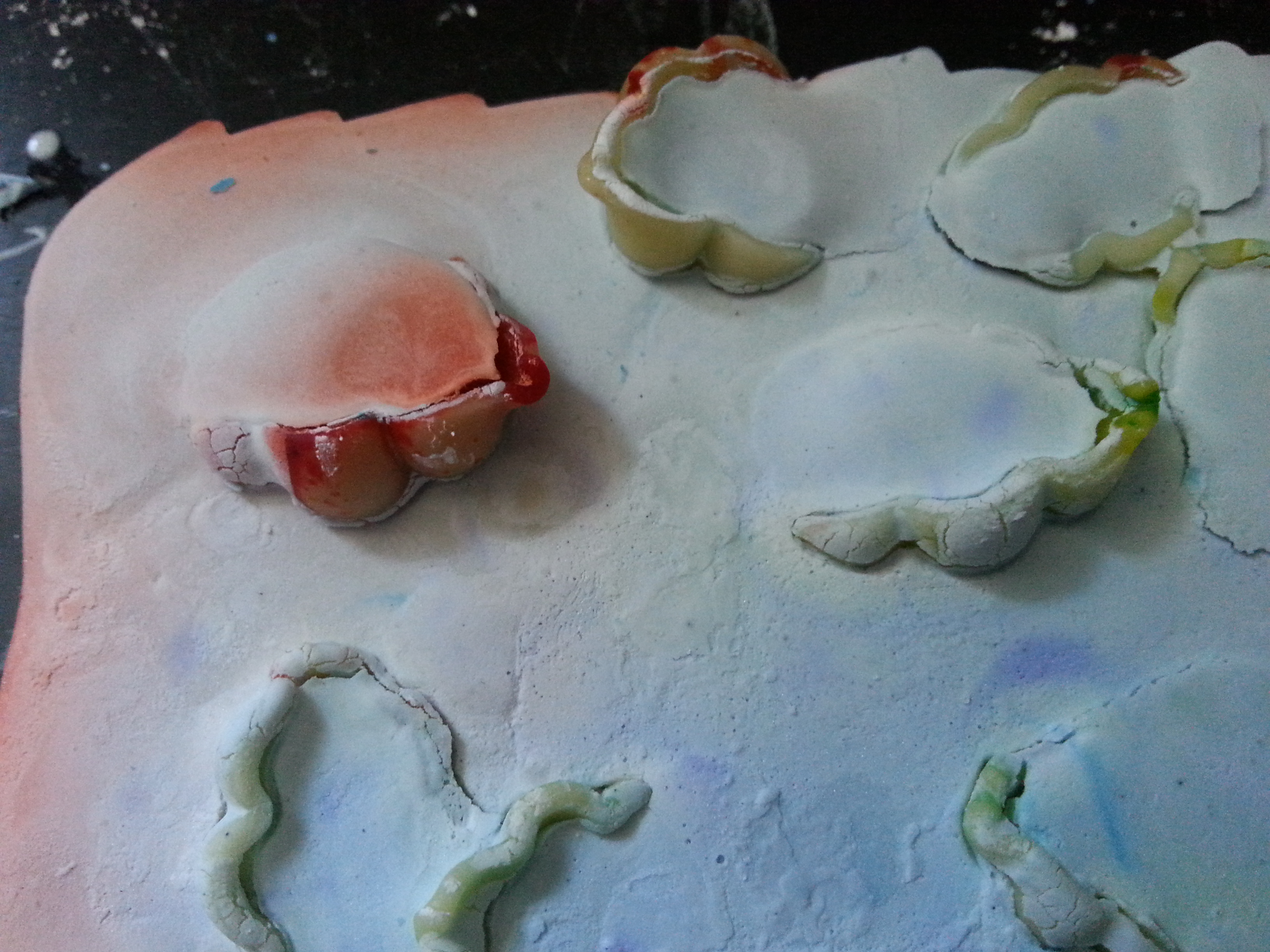 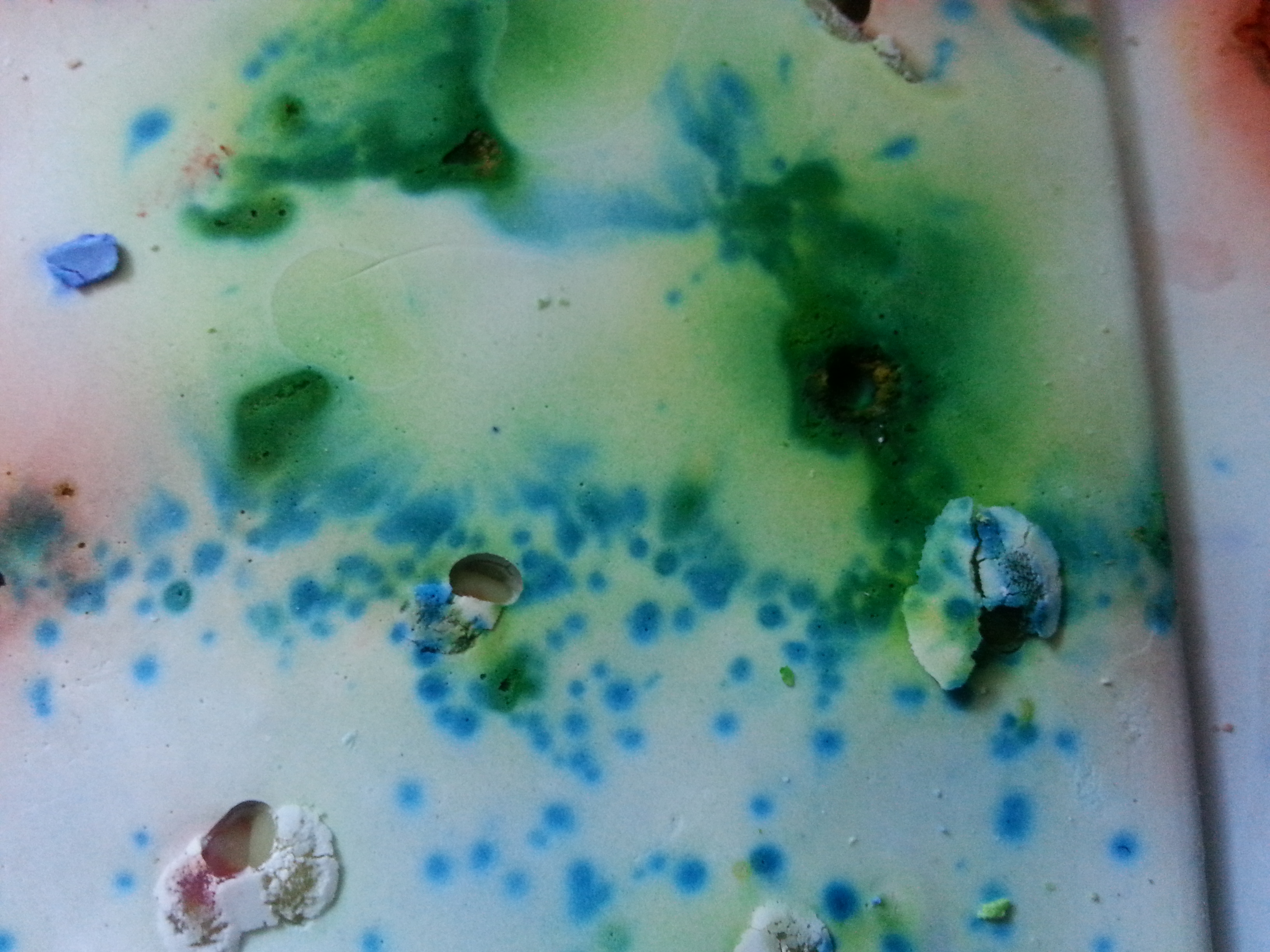 For this sample I used the other sections of the bakery tray. This was a more interesting shape and held the shape well. I added Brusho but this time swirled it through the plaster before it dried. The intention was to create a marbled effect but was not wholly successful. Less swirling might have improved this, or less Brusho.

When the plaster was almost dry I used a bamboo skewer to etch into the plaster. This worked but getting the timing right for the plaster to hold the etched shape and not refill is quite specific. 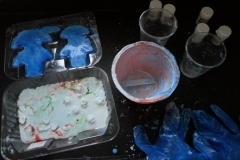 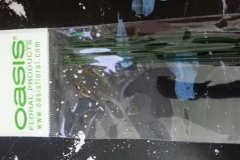 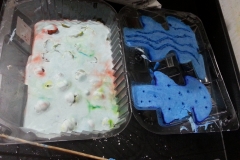 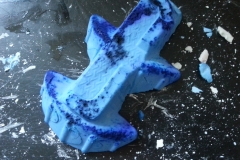 Unfortunately I didn’t make enough plaster so, whilst the armature worked well in forming the shaped hand, the plaster didn’t fill the glove. The armature was also visible in places where it touched the inner surface of the glove.

Despite the flaws, I like this piece as it has potential for further exploitation and experiment. The shaping of the hand held pleasingly well even if not perfect. An alternative armature which isn’t as sharp may prevent the plaster being pierced.

Obviously creating more plaster is also necessary – I did try to add a second batch of plaster to the glove but it didn’t attach to the original which surprised me as I expected it to behave like a clay slip and attach as it set. 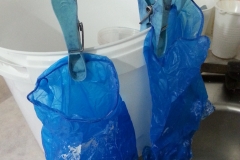 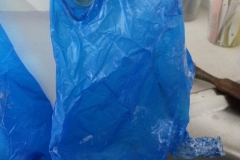 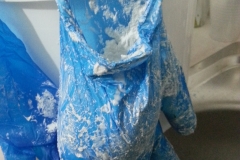 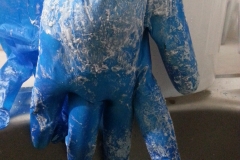 Plaster of Paris is an interesting medium but takes practice to get the consistency right and also judge the amount required. It is surprisingly heavy which may limit the size of any project. It wasn’t as fragile as the air-drying clay but dries very quickly so careful planning is needed before making up the plaster for use. I also need to research whether pieces can be joined together (see hand above).

Taking on board the tutor’s comments from Assignment Two, with the sketchbook work for this assignment, I considered in particular: Scale and how the work could be worked in different sizes for different effects Potential for development of the sketches Ideas for building on earlier assignments Critical analysis of the success or otherwise of the […]

Sculptor Rachel Whiteread was the first female to win the Turner Prize in 1993 for best young British artist. She also has the unique accolade of winning, in the same year, the K Foundation Art Award for worst British artist. Whiteread’s signature work involves large-scale casts of the interior space of objects, both everyday objects […]

Project 1 – Moulding from a surface The moulding relief paste was far and away my favourite medium for this exercise. The paste combines well with textiles, takes crisp imprints, remains maleable and can be coloured, stitched and worked into. It is also accepts embedded objects well. The variety of pastes available (pearl, matte, gloss […]